Why a monorepo? Requirements for a good workflow 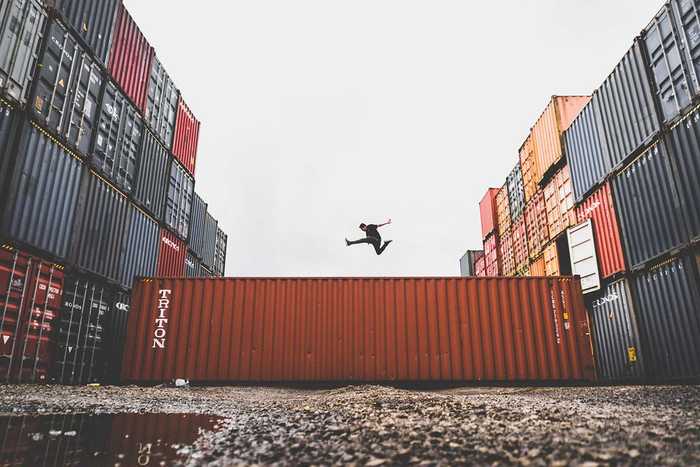 Why a Node.js monorepo?

Those who have worked maintaining many dependent packages in different repositories would answer to this question with lots of reasons very quickly. I’ve been dealing with this scenario for many years, and I can tell you that I have suffered it in my own skin. In fact, in the past I have suffered it even when trying to maintain many packages in in the same repository.

I don’t want to have a monorepo just because it is a trend, I want to make a list of the problems that I suffered in the past and that I want to solve, and really check if they would be solved using a monorepo. Let’s the some problems:

In theory, it is perfectly possible to work in one package independently, then publish it, and then we can go to the other package, upgrade the dependency and continue working on the integration until it is ready, then publish it, and so on… They are different packages because they are independently testable and deployable/distributable, and that’s how they must be. But, in the real world, unfortunately, this workflow is not so easy. In the real world we make mistakes, we don’t define the details of the implementation needed in one package at the sufficient low level, and when we are integrating the next package we realize that we have to make a step back and make a change in the package that we have just published, and then return to the next package again. Suppose that you are maintaining a project consisting on about ten packages, you are running the E2E tests of the last package, and then you realize that you have to modify again the first one… well, I can say that it’s very frustrating, to say the least. Even if everything goes well, the process of release becomes slow and tedious. 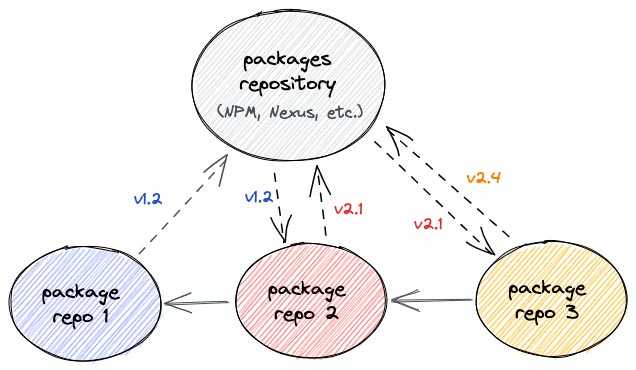 And this is only one of the main problems that I have found working with different repositories. Let’s see some more:

Mitigating these problems in the past

Let me make some memory about how we tried to solve some problems in the past, because it may be useful to check if all of these problems are really solved using the tools that we have now. During years we all have found different ways for mitigating one or another problem from the list above using different “hacks”, but the truth is that usually, when you mitigate one, then the other gets worse.

Let’s see some examples. I have named some of them as “pseudo workspace using x”, so, first of all, what I mean by “pseudo workspace”? Well, by “workspace” I refer to the feature of linking dependencies between the packages in a repository, so it does not install the dependency from the remote repository, but from the code of the other package in the repository at that moment. That’s what today is named a workspace in NPM and Pnpm, for example. It allows to make changes in one package and see them in the other packages in the repository without the need to release a new version. As years ago I didn’t know about a real workspace tool, I have tried by myself all of the next approaches, usually with bad results:

All of these methods and “hacks” talk about solving the problem of linking dependencies locally to avoid having to publish packages before building the others or running the integration tests, but none of them talk about solving another “problem” created by a monorepo:

If we have everything in a repository, we’ll have to test everything every time we try to promote the code, until we have a method for detecting which packages have been modified and which ones depends on them.

Should we give up?

At this point someone could say, “Well, if having different packages produces such problems, why not to have all of the code in one single package in one repository?”. The answer is simple: because we don’t want to have a monolithic package, we want to solve all of the mentioned problems in the workflow, but keeping isolated each package to be able to distribute it independently, and continue testing it independently, apart of running the appropriate integration tests when correspond.

In the next chapters we will see that most of the problems have been already solved if we choose the appropriate tools. But first, let’s recapitulate a list of requirements to avoid the inconvenience mentioned above.

Requirements for a monorepo

Based on my ugly experiences described above, we can see that a monorepo is not just about “code colocation”. It should solve the real underlying problems that we find when working with many dependent packages or projects. So, here is my list of “must have” requirements for a good workflow:

Now that we have the list of minimum requirements, we can look for the appropriate tools to satisfy them all. At this moment there are many tools for working with monorepos, and the list is increasing quickly.

At this point, you can check the monorepo.tools webpage, which provides a good explanation about what a monorepo should be, and a larger list of requirements. Here I have included only those which I consider strictly necessary, and I have omitted those which I consider only “nice to have”. The site also includes a list of monorepo tools with a comparison of their features.

I’m not going to make a comparison between tools here, so I will focus in two tools that I am currently using with good results. We will see how these tools meet the mentioned requirements.

Using Pnpm we will meet the first one criteria: “Configuration for linking dependencies locally”. It includes a workspace feature which is able to link packages locally, and it does the job pretty well. It also changes automatically the linked dependencies to the desired version when the package is published, with support for pinned dependencies or semver ranges. As a brief summary, it is able to:

Nx provides to us the other needed features. It is a monorepo tool that is able to make a dependencies analysis, detect affected projects, and orchestrate tasks. As an extra, it is plugabble, and it provides boilerplates to create monorepos for some specific libraries or frameworks, such as React, Angular, etc. But I personally prefer to use only the core features in order to avoid coupling my projects too much to a specific technology or plugin. Among other things, it provides:

In this post we have seen some problems that were common in the past when working with many dependent packages and some methods or “hacks” that tried to mitigate them. We also have seen how using a monorepo with the appropriate tools might solve those problems. After choosing the tools based on the requirements, in the next chapters I will provide examples about how to configure them to create a complete continuous integration workflow using Github Actions that will make our life as developers easier (at least it did in my case 🙂).